What do you do if you’ve lost your biggest client? 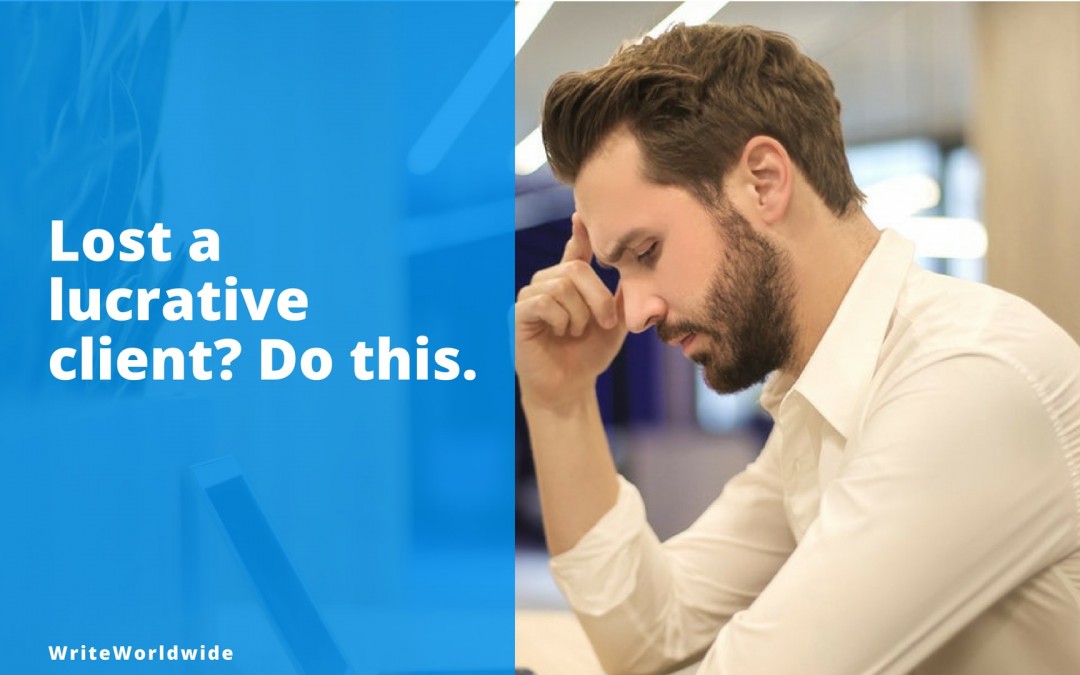 I remember a couple of years ago one of my biggest clients decided that their budget had run dry and that they would have to put all my work on hold for the next couple of months. Cue mad panic at the loss of income followed almost immediately by nagging self-doubt.

Was it my work? Did they have a problem with my pricing? Had I used the wrong emoji in my last email, or worse, did I use too many emojis?

Of course, none of my notions (especially those verging on the ridiculous) were even remotely true. I had worked with this client for well over a year, had a few referrals from them, a glowing testimonial, and they had put things on the back burner for a few weeks before.

And so, I soon calmed myself down but no matter which way I looked at it, I still needed to replace that lost income.

Now, I am a massive believer in cold emails and even direct mail, but I needed something fast that I could count on. So I went where any freelancer should go in times of hardship; I went to LinkedIn.

Before I go any further, I think I need to outline my strategy for targetting and engaging with potential clients on LinkedIn. It goes something like this.

Find groups in a niche I am interested in writing for

I don’t have a specific niche that I write for, but I do like to sometimes target certain industries. I’ve targetted everyone from alloy wheel manufacturers to custom tailors in my cold emailing campaigns, but when it comes to LinkedIn, I find it’s best to target groups of professionals that are usually quite active on the platform. For example recruiters or hotel marketers.

Join these groups and start commenting on people’s posts

And I don’t just start dropping random comments like ‘wow, what an interesting topic’ or ‘great post!’ I look for posts where I may have something of value to add and then I spend a little time writing something that will help the original poster.

Connect with people who reply

Again this is not a scattergun approach, so I don’t connect with everyone who replies. I only send requests to those who I have engaged with or who seem genuinely interested in what I have to say.

I always send a message when I connect with someone on LinkedIn just to say hi and to ask how they are doing. One thing I never do is pitch someone immediately.

I once had a guy connect with me and then pitch me immediately asking if I wanted to invest in his new app. I gave him a little friendly advice and told him he should start a conversation first and pitch later.

He told me he understood and appreciated the feedback then sent me a message saying ‘Hello, how are you?’ Then immediately after that another message saying ‘Do you want to invest in my app?’

(This is where several facepalm emojis should go, but those lingering doubts about their use are still nagging at me)

The reason for telling you this story is to illustrate what an instant turn-off it is when someone pitches their services in the first message. And this is why my LinkedIn strategy is a slow burner.

And yes, you’re right, I wanted a quick fix so why am I prattling on about slow burning stuff?

Well, a lot of those connections I made in various groups were now ripe for a pitch. I had engaged with them by commenting on their content, connected with them and had a brief chat.

Then over the following months, I had continued to engage with them on their posts on LinkedIn. Now it was time to ask if they had any need for my services.

So I went back through my LinkedIn messages and sent out a message to some of the most likely prospects I had connected with. Within a few hours, I had arranged a few calls to talk about potential work and had one new project to work on.

Of course, this wasn’t anywhere near enough to replace the income I had lost, but it was a great start. And when I was going through my old messages, I noticed quite a few dormant clients that had completely slipped my mind. These were people I had worked with before but hadn’t heard from in months or even years. So I then set to work on them. 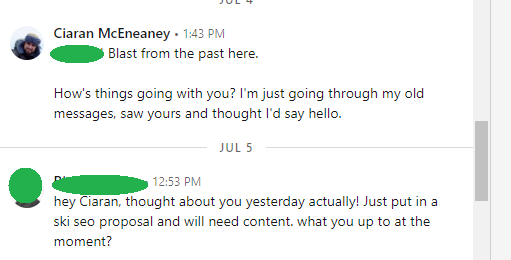 Sometimes all it takes is a simple ‘hello’

After an hour of checking profiles and sending out messages to this list of old clients I started to get replies, and by the following day, I had two new long-term projects and a couple of quick jobs that I could do there and then.

I still haven’t replaced my lost income entirely, but I have managed to do something better. I created new working relationships with some great prospects and reminded some old clients that I was available and taking on new work.

In the short-term, I have lost out a little financially, but at the end of the day, these new working relationships could prove to be far more lucrative than the one that got put on hold for the next few months.

While things worked out well for me in the end, I should still have been taking the ‘constant marketing’ approach to staying in touch with my older clients. The fact that I hadn’t contacted some of them for over a year is embarrassing and to be honest, I’m pretty sure that had I touched base with them on a regular basis, I would have had a steady stream of work from them.

So don’t make my mistake. Always market to your client list no matter how long it has been since you worked together because you want to be the first name that pops into their head when the next big project comes along.

And with regards to LinkedIn, there’s a myriad of strategies that you can adopt to build your client list and flesh out your income. All you need to do is choose one, stick to it, and if it doesn’t work out, try another.